Until recently, I taught performance art in Higher Education institutions in England. The following is a collection of notes on my role and its responsibilities, organized to effectively communicate creative solutions to various problems I encountered. I hope this short text will contribute to some of the needs of performance arts practitioners – both individuals and teams – and will facilitate the further development of a healthy and safe artistic and educational community.

In the mid-2000s, Denis Cuspert and Daniël Ploeger both live in Berlin, about 10 minutes away from each other. Although they have some things in common, they never meet.

In 2005, a DVD is released. Simon Rattle conducts Carl Orff‘s Carmina Burana with the Berlin Philharmonic. Daniël Ploeger is a trombonist in the orchestra.

In 2006, Deso Dogg, aka Denis Cuspert, releases a CD, Schwarzer Engel. It includes the German song Willkommen in meiner Welt, Welcome to my world:

Welcome to my world, filled with hate and blood.

I write these sentences for my children and I do this with blood.

children’s souls are crying softly, when the black angel sings.

In 2010, Daniël Ploeger ends his career as a musician. In the following years, he relocates to the United Kingdom where he works as a performance artist and university teacher known as Dani Ploeger. Dubbed as the “Jimi Hendrix of the Sphincter”, he is a Senior Lecturer and Course Leader for Performance Arts at The Royal Central School of Speech and Drama.

In 2010, Denis Cuspert also ends his career as a musician. In the following years he joins a Salafist group, relocates to the Caliphate of the Islamic State in Iraq and the Levant where he works under the name of Abu Talha al-Almani as a mujahid (one engaged in Jihad) and participates in da’wa (religious education and recruitment). Dubbed as the “Leni Riefenstahl of ISIS”, he is considered to be one of the organizers of the Al-Hayat Media Centre.

In 2013, a trailer for the film Urlaubsgrüsse, holiday greetings, is released on Youtube. Men in battle dress, wearing balaclavas, march through a forest. They carry a black flag and machine guns. The trailer promotes a film of Abu Talha Al-Almani’s lecture about jihad (trailer : https://www.youtube.com/watch?v=pOCokxVkr84) 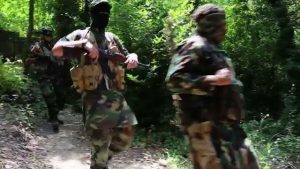 In March 2014, an action B-film is bought from an electronics store in Germany. The cover, label and price tag of the DVD are copied a number of times. An anonymous propaganda film is inserted in the copied packaging material. The fake DVDs, which appear identical to the genuine product, are secretly laid out in the retail areas of electronics stores in different cities in Germany. Because the price tags are accurately copied, the DVDs are scanned and sold as usual at the cash register. The film features Dani Ploeger wearing a balaclava, carrying a black flag and firing a pistol. The following text is read in Dutch:

Governments and media are leading an aggressive campaign against the citizens of their nations.

Through the dissemination of lies and structural misrepresentation they seek to bring into disrepute a key strategy of resistance against oppressive majorities.

For too long, the notion of “terror” has been presented as the epitome of evil.

The time has come to reunite the term with its meaning according to the Van Dale Dictionary: “organized political violence”.

Terrorism is an effective means to disrupt oppressive power structures through the invocation of fear in its facilitators.

We must reclaim the notion of terror as a weapon of resistance.

Celebrate the end of the majority! 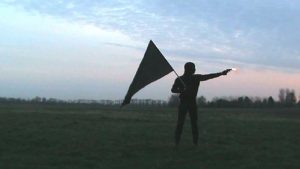 -You will obtain a knowledge and understanding of the responsibilities of your role and how it relates to other roles.

-You will develop practical skills that will enable you to demonstrate effective time management and organisational skills.

-You will develop thinking skills that will enable you to creatively solve problems to further independent and collaborative work.

-The development of broader life skills that will enable you to communicate effectively and actively collaborate with others to achieve common goals.

-You will develop practical skills that will enable you to practice and apply health and safety considerations rigorously and consistently in your work.

-You will develop practical skills that will enable you to contribute effectively to the needs of a given production or performance as an individual and as a member of a team.

A prominent German ISIS propagandist was killed by a U.S. strike while he was traveling in a vehicle in Syria earlier this month, a U.S. official told CNN.

The ISIS recruit Denis Cuspert, also known as Abu Talha al-Almani, had once gone by the name “Deso Dogg” in the Berlin rap scene.

He traveled to fight Jihad in Syria after converting to Islam and becoming involved with Millatu Ibrahim, a pro-Jihadi group in Germany founded by Mohamed Mahmoud, an Austrian jihadi who has also taken on a prominent propaganda role for ISIS in Syria.

I am writing to formally notify you that I wish to resign from my position as Senior Lecturer and Course Leader Performance Arts.

I have very much enjoyed working with the students and my colleagues on the Performance Arts course. However, I feel that the expectations of my current position in terms of administrative duties and other activities that are outside my area of expertise are too extensive to be combined with my work as an artist and researcher.

What do the two biographies presented above have in common? Surely, the parallel I am suggesting is perverse, and the insertion of a set of learning outcomes of a university degree might further heighten the apparent arbitrariness of this little story collection. However, all these fragments do have a shared element: each of them involves violence, albeit in different forms.

Slavoj Žižek suggests that there are two kinds of violence. The first, subjective violence, concerns those acts of aggression that are directly perceptible: “crime and terror, civil unrest, international conflict […] performed by a clearly identifiable agent” (p. 1). The violence promoted by Abu Talha Al-Almani is obviously of this kind, and so are the signs of physical violence presented in my TERROR video.

The second kind, objective violence, is less conspicuous. Žižek identifies two forms of objective violence. Firstly, language and its use can embody a form of symbolic violence. The way in which words are defined and how they are instrumentalized in relation to subjects may substantiate an act of aggression. Although at first sight TERROR appears to concern subjective violence, the text I recite actually engages with a form of symbolic violence. Arguably, the propagation of a simplistic understanding of terrorism as a pure act of evil, regardless of its means and objectives, also enforces the view that resistance against a – potentially oppressive – majority is always illegitimate.

Considering the selection of Learning Outcomes listed above, we might argue that these also operate as a form of symbolic violence. Indeed, the frequent use of words like “responsibilities”, “roles”, “goals”, “effective” and “skills” impose a sense that more intuitive ways of working are inferior. However, the more relevant violent dimension of these goal-oriented educational approaches is of a different, broader scope.

Accordingly, Žižek suggests that apparently unprovoked outbreaks of subjective violence should be understood in response to objective, systemic violence. Thus, Cuspert’s motivations to endorse violent Islamic terrorism should not primarily be seen as the result of an escalating religious fanaticism in an assumed inherently violent belief system. Instead, his biography of unfinished education, poverty, criminality and prison sentences (also reflected in Schwarzer Engel) suggests that his enthusiasm for the ideology of Islamic State is more plausibly understood as a response to an experience of being an outcast or failure in capitalist consumer society.

If we consider the Learning Outcomes above in this context it becomes apparent that, rather than a form of symbolic violence, these texts can be read as a reflection of a broader framework of systemic violence. Through these prescribed “outcomes” – as well as the ever increasing emphasis on “employability”, “transferable skills”, and “vocational training” – the neoliberal doctrines of managerialism and goal-oriented profit-maximization (be it monetary, intellectually, or otherwise) are gradually installed as the core values of higher education. For the teaching of performance art (whatever this may entail exactly; this discussion is beyond the scope of this short text) this means that there is no tolerance for an environment where students are encouraged to freely explore ways to provoke, subvert, rethink and redo the social frameworks of systemic violence. Instead, degree frameworks are effectively an extension of this very structure of systemic violence in themselves, and as such operate to foreclose any subversive and genuinely critical potential of performance art practices. Performance art degrees are becoming the ideal training ground for students to become docile performers in Guy Debord’s Society of the Spectacle.

So what can we do? Two suggestions. Without guarantees.

1: Don’t accept a full-time job in higher education. Instead, teach a little here and there to avoid being absorbed into a neoliberal institutional culture and use your outsider position to generate noise in the curricula. Get used to precarity. Don’t get a mortgage.

2: Read Lenin. Not necessarily for the actual political models he proposes. No, read him as a spiritual example. No matter how few supporters of his cause were left, he kept going. Sooner or later, the time for the ultimate performance will come. The masses (hopefully including the students) will revolt.